“Heelwork to Music” is a musical event at Crufts. Crufts is one of the best organizers that celebrate the importance of the heroic act of rescue dogs in different lives of people. It focuses on that special bond between the master and the rescued dog, and how they can express this unique relationship through varieties of skill-set. This event showcases the freestyle skills of canines such as dance, performing tricks, and more! It involves a creative collaboration of dogs and their owners. A Border Collie named Levi made this event impossible to forget!

One of the best things to look forward to in this show is how humans and dogs connect with each other through performing arts. You’ll witness how dogs demonstrate discipline, obedience, and of course, an impressive heelwork. 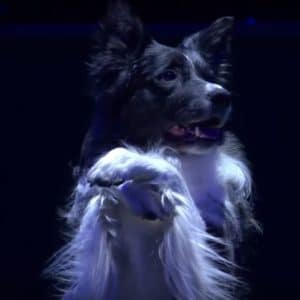 Levi was caught on camera performing the most jaw-dropping act with back-up dancers, Mary Ray, and Richard Curtis. Levi gave the audience spectacular movements that stole the heart of every single viewer. 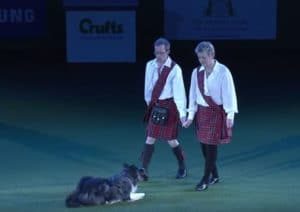 As soon as the music started playing, Levi’s seen sitting on his hind legs, eyes covered by his paws, and patiently waiting for his back-up dancers to come beside him. The three of them began to walk forward in rhythm to the beat of the music. Mary and Richard joined hands while Levi was under the arch of the back-up dancer’s hands, dancing in his adorable footwork, paired with some flawless spinning!

Levi’s eyes focused on the sides of his back-up dancers, and as he eagerly runs in circles, dancing between Mary and Richard, you can see the happiness in Levi’s face. Even though he almost stumbled from leaping over the piece of cloth held by his partners, it did not stop him from finishing the act with an outstanding finale! 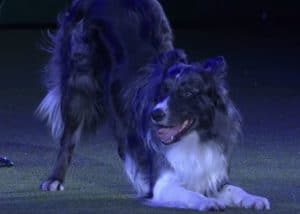 The performance may only last for a short time; however, what made it fantastic, and extravagant was the number of tricks that Levi was able to pull up during the act. Watch Levi’s impressive dance skills in this video!